(First released July 3rd 2013)
This Alchymeic Tool is given to support us in this great process of transformation and spiritual awakening. This unique Energy is a powerful key to addressing a new level of psychic clearing and helps to release us from levels of bondage previously unseen.

Summary below of the history and creation of this Alchymeic Tool…
After the degradation of many of the early south American civilisations, (the Mayans, the Incas and the Aztecs, just to name a few), the earth plane and all of civilization entered an important period of evolution that was to continue for the next 2 thousand years. We have come to know this period as the final stages of the ‘Age Of Darkness’. In witnessing the appearance of the Quetzalcoatl as an Energy, a lot of this relevant history was understood by what was revealed in the vision.

In the creation of this Alchymeic Energy, this is the description of the vision…
Quetzalcoatl, (the “Feathered Snake God” – one of the major deities of the Aztec, Toltecs and other Middle American peoples), appeared to have been placed by the power of God as a plug onto the frontal line of man. This energetic revealed itself as a creature sitting with its beak or head blocking the third eye. Its wings sitting opened around through the eyes and above the brain mind, like a layer preventing the God Light entering. Its feet and claws appeared in the heart centre, tearing and ripping at this well of emotional unrest, keeping it churning. The implication of this was that mankind was to suffer their own condition, in other words, to be made accountable.

The end of 2012, the evolutionary leap, saw the end of this period and the beginning of the Age Of Light. Hence, the timing is now for the un-plugging and release of the weight of the karma. Thus this Quetzalcoatl Wand is the Alchymeic Energy given in response to support the un-plugging of this energetic and to assist this new evolutionary possibility.

This Alchymeic Energy is about the unplugging of the whole body-mind, to make the vehicle available to the evolutionary possibility of this new Age of Light, (the vehicle has to be made available to allow A-cosmic Man*). It is about the restoration and resurrection of Consciousness. It is about the release of the soul to the prior condition of Divine gnosis and allowing the transition of the primitive state of being, to the enlightened soul, or the enlightened man. It appears that we have been trapped in an endless cycle of lifetimes of suffering. This is end time, the beginning of Real Life. The Karma is done.

Quetzalcoatl is different from the normal Alchymeic Wands… 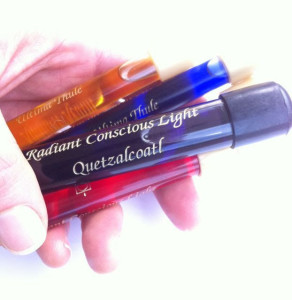 The Quetzalcoatl Wand is larger in size than the usual Alchymeic Wands. This Energy moves to address a vast yet specific karmic structure – a limitation that has lain dormant in the psyche of human kind for thousands of years. It has a very special and unique function.

Another way to help you understand this difference is not to consider the Quetzalcoatl as a Wand, but a unique product in a category of its own. (Its function is still being revealed as more people are engaging it… and it will continue to evolve).

The History Of Quetzalcoatl…

Quetzalcoatl traditionally represents a feathered serpent deity that has been worshipped by many different ethnopolitical groups in Mesoamerican history. The existence of such worship can be seen through studies of iconography of different Mesoamerican cultures, in which serpent motifs are frequent. If you’re interested in reading more about the history of Quetzalcoatl and what it’s specific cultural roots are, here is a recommended link.

However, please bear in mind, that reading these descriptions is not a subsituite to your intuitive awakening of what the Alchymeic Energy is doing. It can help to give you a sense of the energetic that this Alchymeic Energy is addressing, but remember as always, that the Alchymie is about real feeling and awakening to our higher intuitive gnosis. Therefore, always make sure you allow yourself to ‘feel’ into the Energy, rather than analysing or cultivating a ‘notion’ of what the Energy is about (which is not ‘feeling’ but rather ‘mind’).

Testimonial:
“It feels to unlock my stuck energy on every level. I feel the grip released from my heart and everything becomes bright and clear. I feel liberated from any darkness. Thanks you.” U.V – Australia 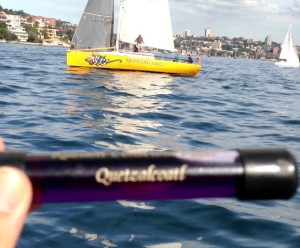 * Here’s a photo from a friend in Sydney, Australia. While holding and using the Quetzalcoatl Wand and sailing on the harbor, low and behold… look what sailed past… (read the name of the boat.)